‏International Day of Solidarity with the Palestinian journalist

Ramallah-26 September 2012- The Palestinian Center for Development & Media Freedoms (MADA) today acknowledges all Palestinian journalists who continue to work professionally and with dedication, often under difficult and dangerous conditions, on the International Day of Solidarity with Palestinian Journalists.

The Day of Solidarity is an opportunity to reflect on the critical role of journalists in the occupied Palestinian territories, and on the importance of defending freedom of expression.

Unfortunately, Palestinian journalists continue to face oppression, both from Israeli forces and from Palestinian parties.

In the last four years alone, MADA has recorded 559 Israeli violations against media freedoms in the West Bank and Gaza.

The most serious of these was the killing of five journalists, Fadel Shana’, Omer Selawi, Ala’ Mortaja and Ehab  Al-Wheedi, in the Gaza Strip.

Also in the last four years, Palestinian parties were responsible for 371 violations of media freedoms recorded by MADA, with an escalation in the last 12 months.

Notably, the peak of violations by Palestinian parties was recorded in 2007-08, following the split in June 2007 between Fatah and Hamas.

Lately  two journalists were arrested in the West Bank by Palestinian forces, and a third journalist, Saher Al-Aqra’ remains under threat in Gaza.

Media workers across the world continue in their own struggles to defend media freedoms, with 107 journalists globally killed to-date this year, according to Press Emblem Campaign (PEC).

MADA Director Mousa Rimawi said we are determined to continue defending freedom of expression in the occupied Palestinian territories, including by reporting on violations of media freedoms and providing legal support.

We will also continue to work to support journalists in other countries, in cooperation with our friends and partners in the Middle East and other parts of the world.

Rimawi added on this International Day of Solidarity with Palestinian Journalists, we renew our call for the international community, particularly countries with strong relationships with the Israel Government to exert strong pressure for an end to attacks against journalists and for freedom of expression to be respected, as enshrined in the University Declaration of Human Rights.

We also renew our call for all relevant Palestinian groups to end their own attacks against journalists and to respect freedom of expression, which is also enshrined in the Palestinian Basic Law. 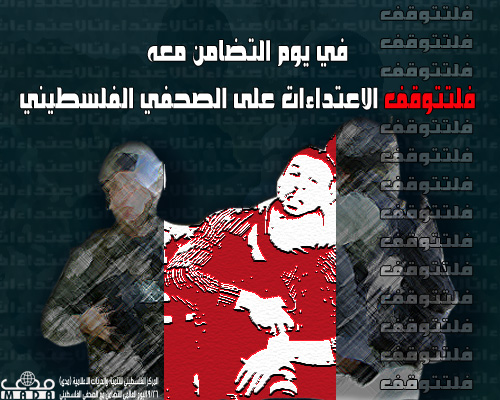