Corona or Covid-19 epidemic was not the only serious virus that has spread around the world, as it has also been accompanied by a massive and rapid spread of rumors, false information and news. Hence, the false news and rumors are part of a larger epidemic that causes confusion and fear.

Social media has been full with misinformation and rumors of Covid-19 that are related to its symptoms and ways to prevent it. These rumors took advantage of the public's fear of the disease by providing prevention and treatment methods which are not based on medical and scientific facts in order to reap economic profits or to increase the popularity of a page on social media.

The spread of rumors and false news led to the spread of panic and anxiety at a higher rate than the spread of the virus itself, as stated by Social Media Manager for the World Health Organization (WHO). This phenomenon was addressed by the WHO in a report on February 2, 2020 and indicated that the outbreak of the Corona virus at the end of 2019 was accompanied with a huge amount of unprecedented information, some of which are accurate and correct and some are false[1].

While health workers struggle in countries where the epidemic has spread with unrivaled dedication to treat the patients, and scientists and laboratories in many countries are trying to find a drug and vaccine for it, others are also working to eliminate a problem that the WHO describes as “epidemic”. This information epidemic is referred to as “infodemic”, a term that consists of information and epidemic.

Since the first recorded cases of Corona (Covid-19) in the Chinese city of Wuhan, false news and rumors have begun to spread on marginal websites and other social media sites. While these rumors serve the interests of their promoters, they on the other hand confuse the recipients and make them vulnerable to misinformation, or it may harm the reputation and privacy of the individual, or incite violence, discrimination, or even hostility against specific groups in society.

One of the examples of some rumors and misleading news that circulated during the advent of Covid-19 is the spread of a "conspiracy theory" and the saying that it is a biological weapon developed by a superpower to harm another country. The US President has revived this theory recently, despite its denial from World Health Organization (WHO) and many other specialists and scientists. Moreover, some rumors have tried to promote that the cause of the emergence of the virus is using 5G technology, as the city of Wuhan was one of the first regions to adopt this technology.

The announcement of the first cases of the Covid-19 virus in Palestine, specifically in Bethlehem in March 2020, accompanied a rapid spread of rumors and misinformation on social media, especially on Facebook, which the Palestinians use frequently.  An official statistics issued by Facebook showed that there are about 2,200,000 subscribers on Facebook on behalf of Palestine, and this number is constantly increasing[3].

Rumors and false news spread like wildfire upon the appearance of the first cases infected with the virus, and the correct news mixed with the false, causing confusion among the citizens, and raised a state of fear and panic among them, especially since the news was not published from unified and reliable official sources (such as the Ministry of Health for example) at the beginning of the spread of the disease. For instance, some news pages on Facebook published false news about the numbers of people infected with the virus, announcing the infection of certain people and spreading their names on social media, or the death of one of those infected with the virus (for example, the Jerusalem bus driver), or rumors about the spread of the Covid-19 virus in a specific area which was not infected at that time, or even the spread of unfounded medical information. 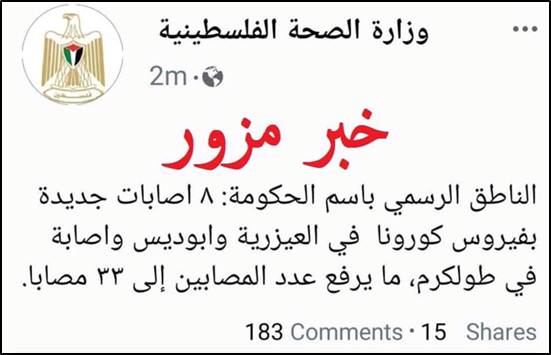 Due to the seriousness of the rumors on the Palestinian society, the Palestinian Center for Development and Media Freedoms (MADA) launched a campaign to fight rumors about Corona on Thursday 5/3/2020 under the slogan "Rumors about Corona are not freedom of expression", on the same day that the Ministry of Health announced that 7 citizens were infected with the virus in the city of Bethlehem. The launch of this campaign came after an extensive publishing of misinformation and rumors through social networking sites and some media outlets about those infected with Corona virus in Palestine. Additionally, the confusion, fears, repercussions and risks involved in this matter that affect the community in its various institutions and circles and weaken its ability to deal better with the spread of the disease.

operations through social networking sites and some media outlets, false news and rumors about people living with Coronavirus in Palestine, and the confusion, fears, repercussions and risks involved in this matter that affect the community in its various institutions and circles and weaken its ability to optimize dealing with the spread of the disease.

The campaign included publications and awareness videos for journalists / activists on social media and media outlets on the necessity to be accurate while reporting news related to Corona, confirm the sources of the news, and to educate the public about the importance of obtaining information from reliable and primary sources. Campaign’s link: https://www.madacenter.org/en/article/1288/

The Committee to Support Journalists and “MADA” Center also organized a round table meeting in Gaza on "The role of the media in maintaining social peace and rejecting rumors related to the Corona virus” on 12/12/2020. The journalists, media representatives and intellectuals who participated in the meeting stressed the importance of obtaining information from its official sources, rejecting all rumors about the virus, and setting parameters to deal with the epidemic. News link: https://www.madacenter.org/en/article/1289/

The campaign also motivated other institutions, individuals and groups on Facebook and other social media networks to do similar work to combat this phenomenon, which contributed to its subsequent decline significantly. For example, we noticed that on the same day we launched the campaign and the weeks that followed, many people opened the link of the World Health Organization (WHO) that we published with the launch of the campaign, and they also began following up on sites that validate the news and that we published links on our Facebook page.

Several local media outlets that interviewed the General Director of the Center, Mousa Rimawi, also clarified many matters related to the campaign and promoted it, which helped in achieving its goals and reaching most of the Palestinian society, who were thirsty to know the facts, not rumors. 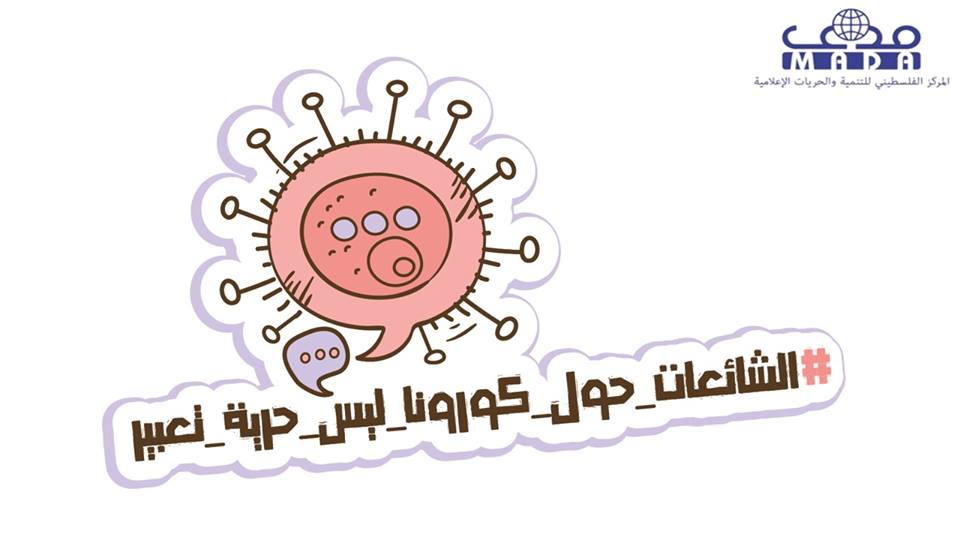 The slogan of MADA’s Campaign 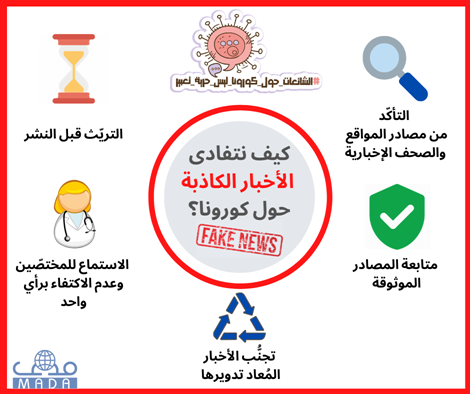 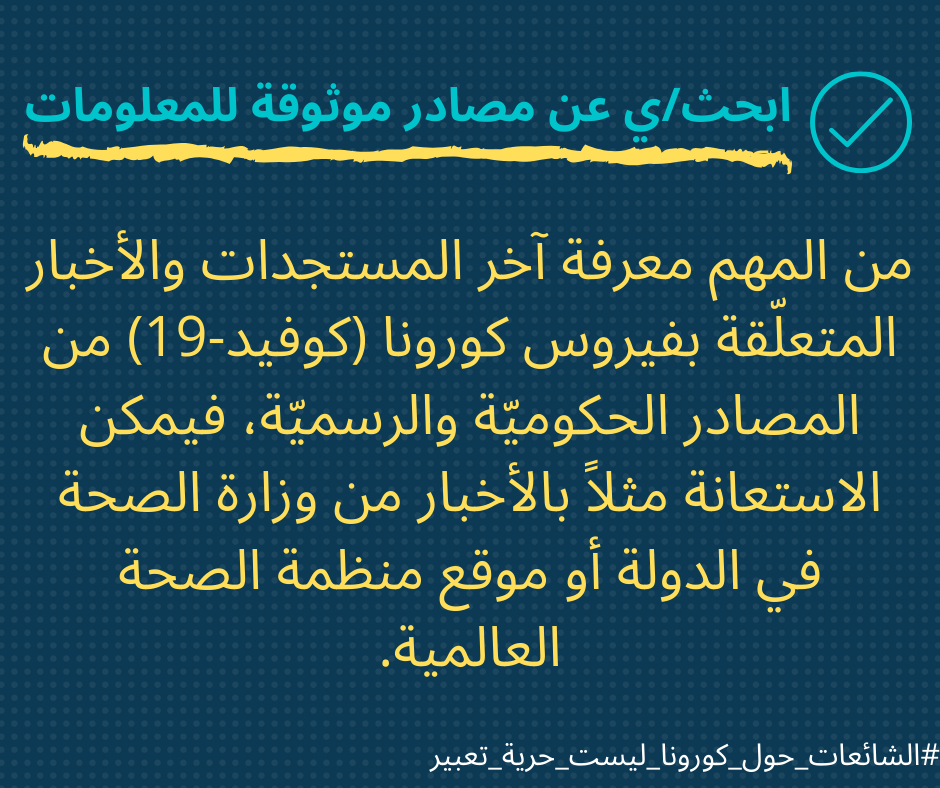 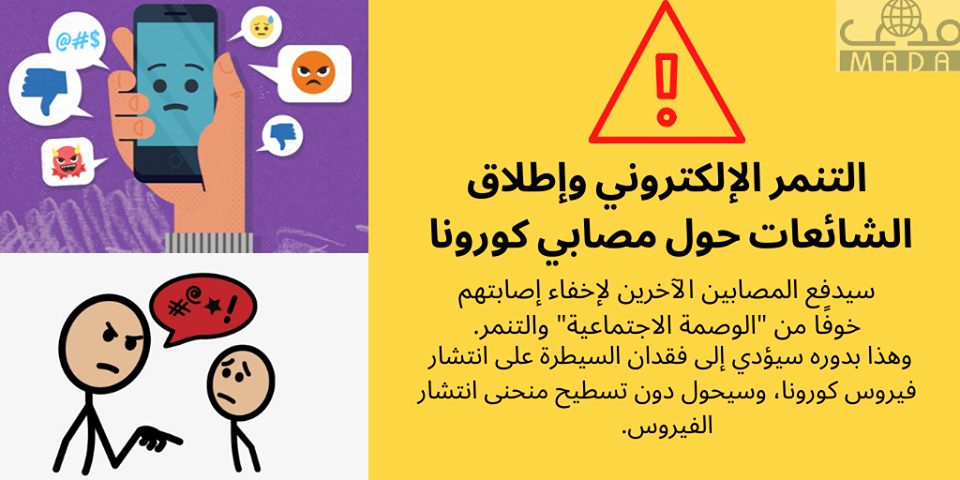 On the other hand, the Palestinian government has taken measures and steps that have had a fundamental role to reduce the spread of rumors about Corona by carrying out an official daily briefing (morning and evening) by the government spokesman, Mr. Ibrahim Melhem, with the participation of Prime Minister Dr. Mohammad Shtayyeh and with the participation of ministers in the government, especially the Minister of Health in the last period and officials at the ministry, to announce the number of infections and regions where the virus is spreading, deaths, and health condition of people infected with the virus, and announce the most prominent official decisions in this regard.

The Palestinian police, in coordination with the electronic cybercrime unit, arrested a group of people who published rumors and misleading news about Corona on social media sites, and they were treated according to the law, according to the official website of the Palestinian Police. At the end of March, the Governor of Ramallah and Al-Bireh, Laila Ghannam, announced that it is prevented to circulate any comments or rumors related to the Corona virus in regards to what is knowns as “April Fools”, and confirmed that the publication of any lies on this issue will be met with the highest levels of control according to the law. 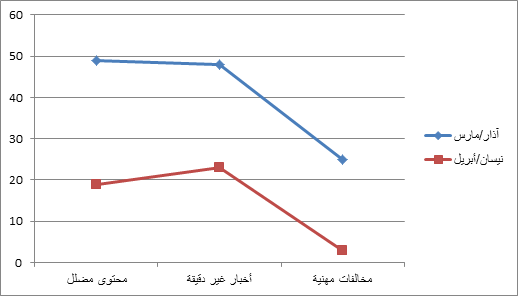 Table (1): The Numbers of misleading and inaccurate news about Covid-19 during March and April

It is clear from the above that the percentage of misleading and inaccurate news about Covid-19 decreased by 63% in the month of April compared to the previous month, which coincided with the announcement of the first infected cases in Palestine. This is due to the steps taken by the government and some civil society organizations, and the efforts of some social media initiatives to reduce the spread of rumors, false and misleading information about Covid-19. For instance, some of the pages on the Facebook, such as: PalKashif, Tayaqan PS, and Misbar began examining the reliability of the news that was circulated by official press sites or users ’pages on social media, and showing whether they were true or false, and also showed them the original sources if the news was fake or misleading.

Rumors and false news are especially problematic for countries, because they are often designed and implemented in order to mislead the population, as well as interfere with the public's right to know and the right of individuals to seek and receive information and ideas, regardless of the boundaries protected under international legal guarantees of the right to freedom of expression[4]. In addition, the rumors cause confusion to the citizens and make them vulnerable to misinformation, or they may damage the reputation and privacy of the individual, or incite violence, discrimination or hostility against specific groups in society. For example, some of those infected with Covid-19 in Palestine suffered a violation of their privacy by publishing their names on social media after they had examined and before they knew the result, and rumors and defamation campaigns spread against some of them. Also, rumors spread against some of them as "fugitives" or refusing to go to quarantine. Others were exposed to bullying and the social stigma that becomes more dangerous than the epidemic itself, due to the fact that those who show symptoms hide from their social environment, in order to avoid its psychological repercussions on them and their families, which leads to a loss of control over the spread of the disease.

This experience once again demonstrated the urgent need to pass the law on access to information, which existence becomes much easier to fight rumors and misleading news, so we are calling on the government to pass the law after the end of the emergency period, which must be in line with international standards.

[1] CNN. How health officials and social media are teaming up to fight the coronavirus 'infodemic. Retrieved from: https://edition.cnn.com/2020/03/01/tech/coronavirus-social-media-reliable-sources/index.html

[3] Al Watan Voice. Palestine: The world's first (in terms of population) with the number of new subscribers on Facebook. Retrieved from: https://www.alwatanvoice.com/arabic/news/2019/02/05/1214863.html

[4] OSCE. Joint Declaration on Freedom of Expression and “Fake News”, Disinformation and Propaganda. Retrieved from: https://www.osce.org/fom/302796?download=true