"MADA" : Israel must held accountable for its crimes against freedom of expression in Gaza

Ramallah - (1/4/2018) - The Palestinian Center for Development and Media Freedoms (MADA) condemns the Israeli unnecessary, disproportionate and indiscriminate use of lethal force and the widespread and arbitrary repression that targeted the peaceful marching towards the border areas along Gaza strip with Israel, that commemorated land day on 30/03/2018. That resulted, in deliberate killings of 16 citizens, and wounded around 1400, including many journalists.

According to MADA’s monitoring and documentation, up to now, MADA documented at least four journalists have been targeted with live bullets: Ahmad Salem Barbakh-Muammar, Mahmoud Adnan Mdawekh,and Wisam Atef Mousa, as well as, the injury of an unspecified number of journalists with severe suffocation (at least six journalists).

Testimonies of three journalists to MADA center reveal the extensive and deliberate use of lethal force and the severe repression of the peaceful demonstrators and media crews; it is noteworthy that journalists were located in a spot that is very far from the border fence.

Freelance photojournalists, Ahmad Salem Barbakh reported to MADA “I was standing at a distance of about 200 meters from the demonstrators. After completing the required pictures for the demonstration and the media coverage, we were on our way back leaving the place me and my colleague Hatem Omar, who is working for the Xinhua News Agency, was leaving the place, by that time we were at least 700 meters away from the border fence, I was shot with an explosive bullet in my lower abdomen, By chance I was very close to an ambulance where I was taken to Nasser Hospital. There were 14 shrapnel in my lower abdomen, I underwent a three-hour surgery, where 30 cm of intestine was removed, bleeding was controlled and still under observation in hospital”. 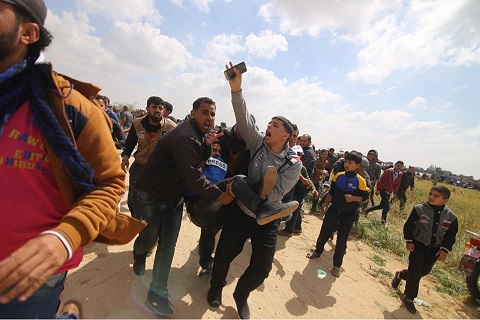 “Media Town” photojournalist Mahmoud Adnan Madoukh was injured by live bullet that broke his leg while he was covering the march. Although he was standing behind the demonstrators, and about 500 meters from the border fence as he reported to MADA.

Journalist at radio Fursan Al Hurriah and a filmmaker, Wisam Atef Salah Mousa (37years) also reported to MADA"I was more than 400 meters away from the border fence, and while I standing in a point near the ambulances, I was deliberately targeted and shot with two live fire- bullets, one of which penetrated my right leg and came out of it, whereas, the other bullet penetrated my left leg causing a severe rupture in my leg muscle- just below the knee, according to hospital estimates, the bullet that hit my left leg was larger and was estimated to be a 250 bullet”.

However, The Israeli occupying authorities and its forces continue to disregard the fundamental human rights of the Palestinian people therein, primarily the right to life, through the excessive use of force and collective punishment. The Israeli attacks on Palestinian protestors constitute a suppression of Palestinian rights to peaceful assembly and freedom of expression and above all the right to return and self-determination.

Therefore, MADA calls upon all member states and international community to take concrete actions as part of third states obligation under international law to ensure protection and safety of Palestinian citizens and journalists under the international human rights and humanitarian law. As Israeli Occupying Forces (IOF) had extensively prepared for and deployed additional forces and equipment in the area, including hundreds of snipers, drones, bulldozers, and issued explicit orders to use live fire against Palestinian protestors and journalists. 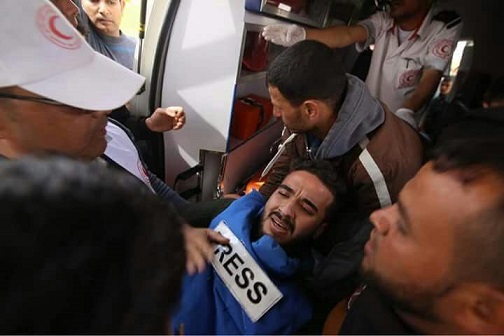 MADA send its warm greetings for all people celebrating Easter