MADA: Calls for a commission of inquiry into the case of journalist Sami Al Sa’ee

Ramallah- 27/02/2017- Proceeding from our deep belief of personal freedoms and human dignity and the prohibition of torture which was guaranteed by the Palestinian Basic Law in its article 13 thereof, which stipulates that “No person shall be subject to any duress or torture. Indictees and all persons deprived of their freedom shall receive proper treatment, all statements or confessions obtained through violation of the provisions contained in paragraph one of these articles shall be considered null and void”.

In accordance to Sami’s testimony to MADA, at first he was accused of inciting sectarian strife by Palestinian Intelligence service in Tulkarem, due to lack of evidence about his accusation he has been released on bail, before leaving the building and arriving to the front door in Tulkarem he was rearrested, after 15 minutes he was transferred to the Palestinian general intelligence investigation center in Jericho.

A probe was launched with Sami about recruiting for Hamas; an accusation he denied, throughout his detention period in Jericho Sami was exposed to torture in order to obtain information or a confession that inflicted Sami with psychological and physical pain and suffering.

The case of Sami Al Sa’ee and what he was exposed to drove concern regarding the attempts of Palestinian Security Services in West Bank, and Gaza Strip of torturing Palestinian Journalists, that may enhance the intimidation of journalists and the practice of self-censorship, which recorded high rates since the beginning of the internal political division in 2007.

The Palestinian Center for Development and Media Freedoms (MADA) deplores this kind of grave breaches. And the what journalist Sami Al Sa’ee was exposed of torture and ill-treatment during his detention and calls upon all concerned authorities the urgent need to advocate for presenting the case of Sami Courier before an ad hoc/ inquiry committee to investigate and follow up on this issue and to take all measures against all violators and perpetrators of such acts. MADA also calls all the institutions of civil society to unite to confront this kind of irregularities, and calls on fellow journalists to stand by journalist Sami Al Sa’ee to help him overcome the difficult ordeal he faced during his detention.

Lastly, Human dignity is an authentic right for all citizens, in addition to freedom of opinion and expression of the Palestinian people that is guaranteed by the Palestinian Basic Law in its Article 19 and the importance of personal freedom, that is all in line with what has been ratified by international treaties including the (ICCPR, CAT) In addition to the customary rules of jus in the Universal Declaration of Human Rights. 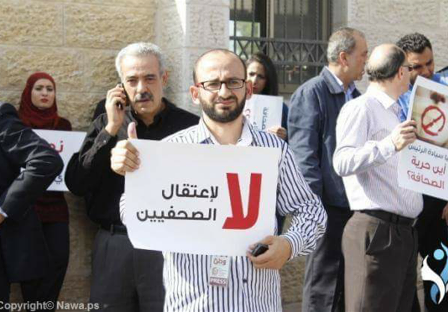