CSOs call for reversing the decision of blocking tens of websites

Ramallah – (22nd Oct. 2019) – The Palestinian Center for Development & Media Freedoms (MADA), in cooperation with Watan TV, and with the participation of the Independent Commission for Human Rights ICHR, the Palestinian Human Rights Organizations Council, the Palestinian Non-Governmental Organizations Network, the Civil Commission for the Independence of Judiciary and the Rule of Law (Istiqlal), has held a  press conference this morning on blocking the websites, at the Headquarters of Watan TV, in Ramallah.

The participants have expressed that the court has to reverse its decision on blocking dozens of websites, as it violated the freedom of press and expression, and prejudices the public press freedoms.

Ramallah Magistrate Court, presided by Judge Mohammad Hussein, issued a decision yesterday to block 49 Palestinian websites under the pretext of publishing pictures, articles and phrases that "threaten national security, civil peace, disturbing public order and public morals, and stir up the Palestinian public opinion”. This blocking is issued in accordance with Article 39, paragraph 2, of the Cybercrime Decree Law No. 10 of 2018.

Mr. Mousa Rimawi, Director General of  MADA, pointed out that this decision came in the midst of the campaign launched by MADA Center to raise awareness on digital rights and defending the same, the efforts made with the NGOs to face the Facebook’s policy of blocking Palestinian media websites, knowing that this is the second decision issued in two years as a similar one was issued by the Public Prosecution in 2017 under which 29 websites were blocked and the latter decision has not been reversed until the present time.

Rimawi demanded that such decision, on contrary with the Palestinian Basic Law, and all of the international conventions and treaties signed by Palestine, has to be  cancelled. He emphasized the need to harmonize Palestinian laws with international laws and legislation, especially the cybercrime law, which the Magistrate Court relied on in its decision. He further stressed the need to pass the law on the right of access to information and to create the legal environment as a whole to safeguard freedom of expression and the protection of journalists.

He  also called for the need to accelerate the formation of the civil alliance to protect freedom of expression and digital rights in order to unite efforts to meet the challenges in this area. The formation of this alliance will be announced soon. 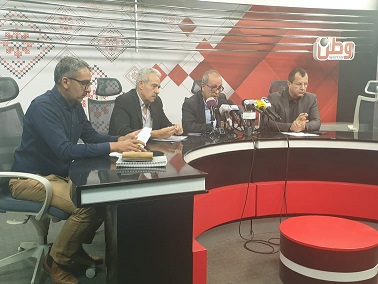 For his part, Mr. Isam Al-Arouri, who spoke on behalf of ICHR, and the Palestinian Non-Governmental Organizations Network, called for the need to reverse this decision in order to serve the Palestinian reality and serve the project of independence and meet the supreme national interest. He pointed out that the ICHR has submitted this morning a request to Ramallah Magistrate Court to reverse its decision of blocking the websites under a signed power of attorney for Ultra Palestine Website.

Al-Arouri also flagged the necessity of reviewing the cybercrime law that contains many articles contradicting the Palestinian Basic Law and the freedom of expression, such as Article 29 and Article 39, which contradict the UN Human Rights Council Resolution. He also pointed out that the issuance of such decision to block websites would impede the functioning of the political process, where there is serious talk about holding presidential and legislative elections soon.

Mahmoud Al-Ifranji, the representative of the the Palestinian Human Rights Organizations Council, called on the Palestinian Judicial Council and the Public Prosecution to respect the right of all citizens to access information and safeguard their inherent right to express their opinions. He also called for suspending the cybercrime law until it is amended and to review the terminology contained in some of its articles which no party can interpret or indicate its boundaries temporally and spatially and write them off.

He added that the Council believes that the decision of blocking the websites strongly violate human rights and basic freedoms with reference to the ease of access of citizens to the websites blocked under the tremendous technological developments through advanced technical programs. Al-Ifranji also pointed out that the court’s decision is a clear constitutional violation of Article 19 and Article 27 of the Palestinian Basic Law.

Mr. Majid Al-Arouri, the Director of Istiqlal Foundation, pointed to the situation in which such websites could be closed and their relationship to the public order, national security and public morals ,as the government is the party that gets to decide on the need for exceptional procedures in relation to these terms, and therefore the decision of the Magistrate Court is misplaced and is not based on any legal or other justifications. Furthermore, the Cybercrime Law states that there has to be clarifying notes when submitting such requests to the Public Prosecution justifying such action. This indicates that the decision was not subject to scrutiny or justification for such an action, and the court that issued the decision must reverse and cancel it and return all websites to functioning immediately.